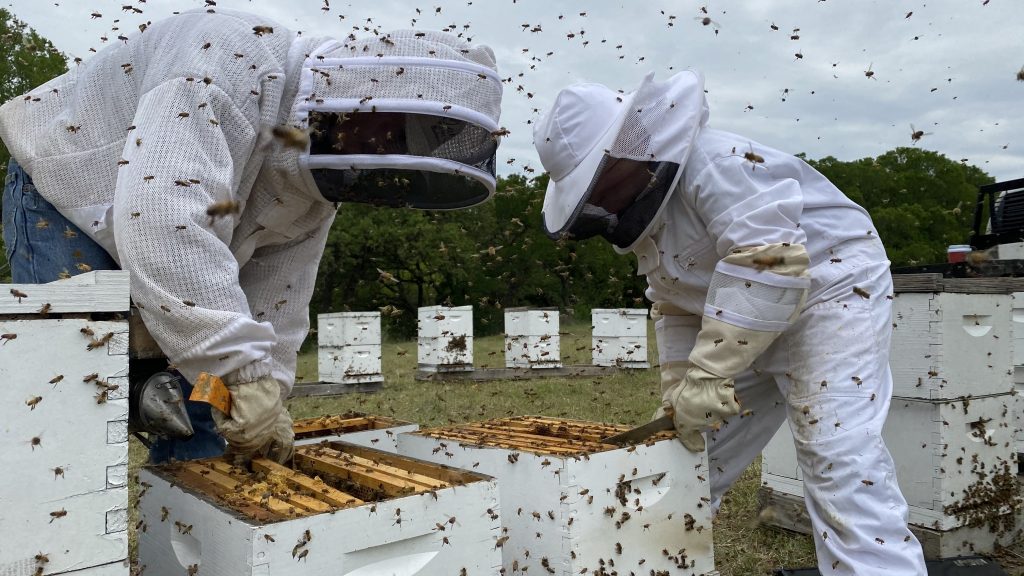 Honey bees have kept themselves for eons.

Within their beehives they have labored tirelessly to produce honey, beeswax & propolis.  Man has harvested these products from the beehive for thousands of years.  In former, less industrial times, honey was man’s most valued sweetener.  Beeswax and propolis had many household uses.  Most importantly, bees have been associated with fruitfulness through the pollination service they provide while gathering nectar from flowers.

Managing honey bee colonies for additional beehives, as well as honey, beeswax and other beehive products, can be one of the most complex activities on the homestead.  Unlike other farm livestock, honey bee colonies are only slightly domesticated.  They can swarm out of our beehive boxes, into a hollow tree and live just as happily in the wild.

There are many moving parts in a honey bee colony.  The queen bee lays in excess of 1,500 worker eggs a day during much of the year.  These eggs then mature to become the 30,000 to 60,000 worker bees that make up a typical beehive during the growing season. This worker bee population performs every function in the beehive except the distinctly male function of mating with a virgin queen, which is the responsibility of the drone bees, and the female function of producing worker and drone bees for the beehive, which is the sole purpose of the queen bee of each hive.

The story of a beehive is the successful interworking of one queen, hundreds of drones and thousands of worker bees.  In a way, we can look upon these three bee castes, working together, as an organism, a super organism.

Holistic beehive management, which is the key to sustainable beekeeping, has to do with an awareness of the yearly cycles of a bee colony.  Becoming a sustainable beekeeper involves gaining enough of this awareness to manage our beehives in such a way that they produce excess product that we can harvest.  Honey bee colonies survive in the wild without human intervention.  Our job as stewards is to not hinder their survival, but rather, to use our awareness of their yearly beehive cycles. With this awareness, we can use appropriately timed interventions in our hives that take advantage of these natural, cyclical processes and enable us to share in the bountiful harvest with our bees.

In light of the amazing complexity and the myriad of moving parts and interactions associated with a beehive, we as beekeepers are faced with questions: What is the best way to gain the awareness of the yearly cycles of a bee colony? How do we sustainably manage them as homestead livestock?  To answer these questions, we need a plan to follow – a plan that recognizes and takes into account all these interacting factors.

Honey bees have kept themselves for thousands of years, but with the  discovery of the bee space in the 1850s and, as a result, the popularization of the moveable comb beehive during the last half of the 19th century, man hit upon a methodology to harvest the bounty produced by the bees as never before.

Utilizing the movable comb beehive in its many different forms has not domesticated the honey bee.  For decades, beehives still had an unquenchable urge for reproduction, which they accomplished, through swarming every spring.

In past decades, a beekeeper’s success largely flowed from his need to “keep up” with the bees each spring.  The bees took the lead and the beekeeper, to varying degrees of success, “kept up.”

In many ways beekeeping has been done largely unintentionally in North America until about thirty years ago.  In 1987, the presence of the Varroa mite was first documented in the United States.  Since then, this parasitic mite infestation & the unseen viruses they vector has weakened honey bee colonies to the point that their indomitable “swarming urge” has been muted.  Spring swarm prevention is no longer the number one job of beekeepers in areas where Varroa mites ubiquitously occupy colonies.

Because of the underlying ill-health of our domesticated beehives, they often do not survive beyond two years.  In this state of low level disease, it is the exception rather than the rule that our beehives routinely try to throw-off a swarm in the springtime.  For honey bees, swarming is reproduction.  Death is a reality in our world.  So, without reproduction, species do not survive.

Don’t worry,  honey bees are not going extinct.  Like all insects, honey bees innately have a high rate of reproduction.  Wild honey bees are surviving through their reproductive mechanism of annual swarming.  If a beehive in the wild does not have the genetic suitability to cope with current day stressors in our environment (i.e. Varroa mites) and successfully reproduce through swarming, then these “less fit” genes are lost from the gene pool and those that are “more fit” reproduce and dominate.

The survival of beekeeping depends on intentional beekeepers, i.e. beekeepers with a plan.