A Beekeeping Plan that Works

For many years I have been thinking of and developing an approach based on a self-contained bee colony that is sustainable and requires few inputs – a management plan that would help beekeepers be successful in this region of Texas.

When I first started pursuing this idea, I had hoped to use the topbar beehive. Initially, its simplicity and self-contained nature seemed to be a good fit. But I continued to run into problems with the topbar that proved insurmountable for what I was trying to accomplish. “Why reinvent the wheel?“ I thought, since the Langstroth hive already addressed many of the shortcomings I was encountering with the topbar hive.

Compared to the topbar, the Langstroth is “a beehive with training wheels.” It provides a more controlled environment for the bee. With fewer variables, it becomes easier to produce repeatable results with the hive.

We offer a one-day beekeeping management class followed by an ongoing mentoring program.

As I continued to work on an approach, I learned from what I saw while doing feral bee colony removals from homes and other structures. I found that feral colonies all have a maximum size and comb space in our region. This gave me important clues as to how large the hive needed to be to accommodate the honey storage seasons. By adapting the size of the hive to the bees’ regional requirements, I was able to make the colony more self-contained and reduce the need for off-hive storage of comb, an important step in the right direction when it comes to contending with wax moths.

I also noticed that bee colonies that requeen themselves at certain times of year exhibit much greater vigor than colonies that kept an old queen. I’ve sought ways to incorporate this observation into the management approach, too.

With the introduction of the Varroa mite in 1987 to the U.S. and Africanized bees in 1990, what it takes to keep bees successfully has been permanently altered. Amateur beekeepers are having less and less success keeping their bee colonies alive unless they follow a plan which incorporates:

Yet, for the most part, training given to beginning beekeepers has not significantly changed in the past 50 years. It fails to take these new complications into account. Thus, many amateur beekeepers begin their beekeeping journey full of interest and enthusiasm only to abandon beekeeping within 2-3 years after repeated difficulties. They begin as “bee havers,” but they don't make the transition to becoming successful “beekeepers.”

But with adequate training and a plan that works, many amateur beekeepers can become successful at keeping bees, and they can do so without having to purchase replacement colonies every few years. 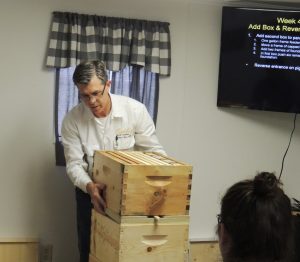 I use and teach a self-contained bee colony and apiary model that uses three eight-frame-deep Langstroth boxes to perform all the functions that a bee colony will need throughout its yearly cycle.

Using this model, a new "bee haver" encounters most of the beekeeping activities that he needs to master for the transformation into a beekeeper within the first year’s beekeeping experience. This includes building a nucleus colony into a multi-box beehive and harvesting honey by the beginning of the first summer then achieving increase by the beginning of fall with a piggyback split.

If all goes as planned, by the colony's first birthday we will have accomplished all of the following:

In the process of caring for the colony through the first year, the new beekeeper will have sampled and treated for the parasitic Varroa mite population and will have produced a backup nucleus colony.

So at the anniversary of his first year of beekeeping, he will have completed the cycle and have a mature bee colony poised to make a honey crop plus a five frame nucleus colony just like he started out with.

This model provides enough flexibility that if all doesn't go as planned, the new beekeeper will learn that this model can absorb failure and keep going without him having to buy a replacement colony.

A Process that Can Be Replicated

I have tried to think in terms of a beekeeping process that can be replicated. If someone in our area follows the same patterns and plan as we do, they can get similar results and outcomes. Also, if they need advice, we can more easily communicate about the status and health of their bee colonies. The plan and patterns enable me to understand where he is in the process so I can give him reliable answers that bring predictable results. This is key to the mentoring program that I’m developing and beginning to offer.

I've called this approach the "Oakley Family Apiaries Management Plan" or more simply the "OFA Management Plan." We provide the training, supplies, bees and ongoing support needed to implement this plan on your homestead or small farm.

Our training begins with a one-day beekeeping class that covers the basics and introduces people to this management approach.

Once someone has completed the initial class, they can enter our mentoring program, and we will guide them through the first year of beekeeping. We do this through monthly half-day workshops plus ongoing communication as problems and questions arise.