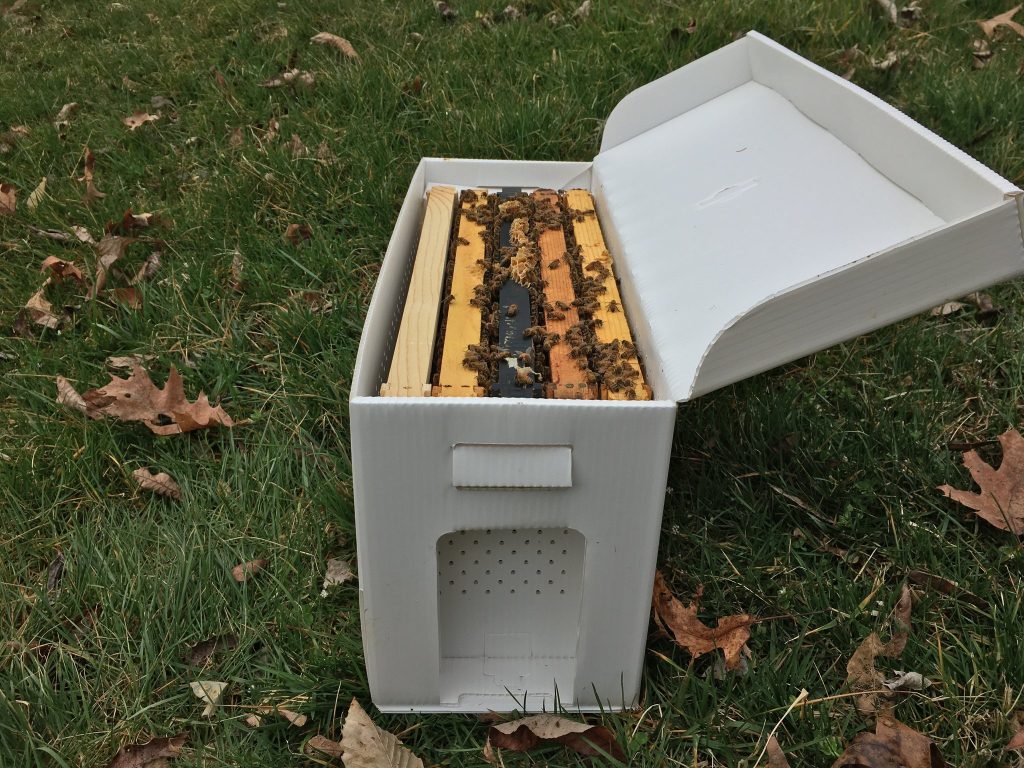 Right now, our beehives are building their populations in order to have enough bees by May to make surplus honey from wildflowers such as Indian Blanket and Horsemint. When the worker bee population in March and April is rapidly increasing, and nectar and pollen supplies are abundant, a honey bee colony will often begin swarm preparations. A swarm is an annual reproductive event whereby one colony becomes two. As beekeepers, we mimic this natural event by creating a nucleus beehive from a mature hive in our apiary. This artificial swarm, or nucleus beehive, can then be used to increase our hive numbers, or it can be sold.

Buying a “nuc” from an established beekeeper is a good way for a beginner to get started. A nucleus beehive is a hive in miniature – all the essential components are present. In this nuc, a newly mated queen will have been laying eggs for a couple of weeks and the broodnest will span 2 to 3 frames, with brood in all stages. The two frames on either side of the broodnest will contain honey and pollen stores, as well as some empty comb and maybe some areas that are still foundation. When the beekeeper picks up a five frame nucleus colony it is usually ready to be installed into a full size box of either eight or ten frame capacity.

In Central Texas, nucs are commonly available for pickup beginning the middle of April. Once these units are installed into a full size bee box they need food resources to grow. I recommend feeding 1 to 1 sugar syrup, a concentration that mimics nectar in nature. Mix 8 lbs of white sugar to 1 gallon (8 lbs) of water. One gallon of water plus 8 lbs of sugar will yield 1.5 gallons of 1 to 1 syrup.

One of the most important products that a nucleus hive can produce its first spring is beeswax comb. Initially there may not be enough room in the two to three combs that make up the broodnest for the queen to lay eggs at maximum capacity. Foundation needs to be drawn into comb rapidly for a new hive to swiftly grow in population. Since a relatively small number of forager bees bring in nectar initially, this growth can be painfully slow. The nectar, or sugar syrup that you provide them, is the carbohydrate source that gives the wax-secreting house bees the calories they need to fashion comb onto the foundation. By providing sugar syrup free choice the first spring, we are helping the small, young hive get off to a rapid start. We have had very good success helping beginners get their hives built from a five frame nucleus hive in mid April to a two deep hive by the end of May – full of comb and bees. In this six week period we commonly feed 10 to 12 gallons of sugar syrup per hive.

There is a limited time window that bees in Texas will draw comb successfully. Once we are into the heat of summer it is difficult to inspire bees to produce comb even with the feeding of sugar syrup. It is vital to encourage a new hive to establish itself by producing several boxes of deep comb during its rookie spring season. Once a hive has built comb, then they are able to fill it with eggs, pollen and honey during other parts of the year when comb production is less certain. If you make the investment of sugar syrup into your beehive initially, then it will repay you with a stable beehive filled with drawn comb that will be ready to survive its first winter.